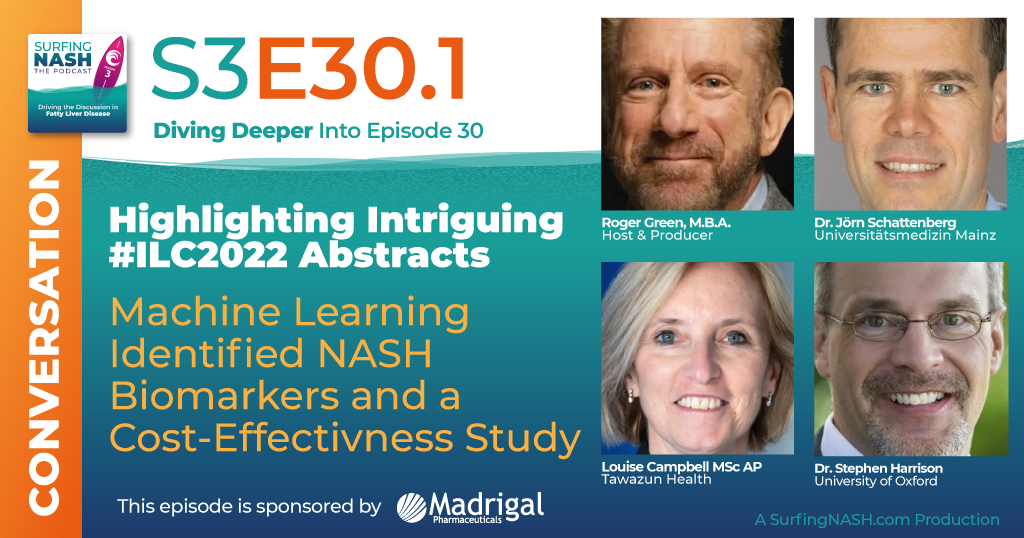 Stephen Harrison, Jörn Schattenberg, Louise Campbell and Roger Green identify some of what they believe will be key papers at 3ILC2022. This conversation focuses on OS 097, which uses LITMUS Metacohort Data to identify the biomarkers that predict each of the four element of the NASH score best and FRI094, a study that evaluates the cost of community-based NAFLD screening for Type 2 Diabetes patients.

Next week, >10,000 Fatty Liver stakeholders are expected to journey to London (rail strike and all) for the International Liver Congress (#ILC2022), the first meeting at this level since the pandemic started to include an in-person attendance option. This week, NASH Tsunami identifies some of the most important and intriguing non-embargoed presentations at #ILC2022. This conversation explores two of these: OS097, Machine learning algorithms identify novel biomarker combinations for NAFLD, from Jenny Lee (Netherlands); and FRI094, Clinical and economic evaluation of community-based preventative screening strategies for NAFLD in people with Type-2 diabetes melllitus, from Roberta Forlano (UK).

Jörn Schattenberg selected OS097 as the first paper for the Surfers to discuss due to its robust dataset (720 liver-biopsied patients recruited prospectively at centers across Europe; 53% with NASH, 26% with advanced fibrosis and 7% with cirrhosis.) and intriguing task (identify the most robust biomarkers for predicting levels of steatosis, ballooning, inflammation and fibrosis independently). The AUCs for fibrosis were robust (0.90 in the test group and 0.84 in the validation set), while the AUCs for the steatosis measures were weaker (0.79 and 0.74, respectively.) Jörn notes that the histological markers vary between the four targets, with steatosis and ballooning predicted most strongly by BMI, inflammation by hemoglobin and fibrosis by VCTE. After questions, Jörn goes on to note that the CK-18 M 30 emerges as a predictor for both steatosis and fibrosis.

The key question comes from Stephen, who asks how diabetes came into this equation in terms of metric, severity and length of disease. Jörn states that the only diabetes metric in the set was A1c, which was the 5th strongest for fibrosis. He also notes that length of disease is exceptionally challenging to determine in a study that relies on patient self-reports.

Louise Campbell responds next, selecting FRI094, a clinical and economic assessment of community-based screening of Type 2 diabetes mellitus patients for Fatty Liver disease. This study began at Imperial while Louise still worked there. The study reported 17% of NAFLD patients with “significant” fibrosis (kPa>8.1 by VCTE), 11% had advanced fibrosis and 3% had cirrhosis (defined as kPa >12,1 by VCTE.) Any of these patients might have been defined by clinical, radiological or histological means.
After questions, Louise would go on to note that all approaches were determine to be cost effective against a metric of 20,000 English pounds.
Again, the pivotal question came from Stephen, who suggested that a kPa of 12.1 (the definition of cirrhosis here) would fit half of his practice. He used this point to remind listeners of the poor positive predictive value of VCTE as a single measure.

When Stephen and Louise finish this point, Louise notes the positive recommendation on cost-effectivesness of community screening while acknowledging the issue around scoring of cirrhosis. Jörn then closes the discussion of this paper (and the conversation) by agreeing with Stephen’s comment on the VCTE kPa an cirrhosis, but noting that the high levels indicate a serious challenge (even if not a level of cirrhosis). 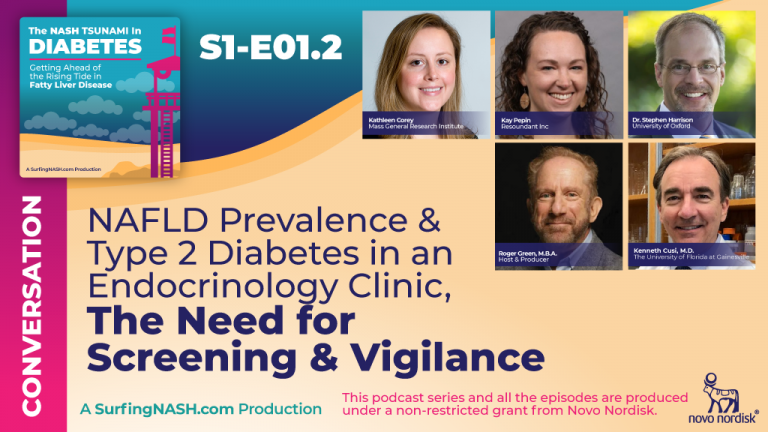 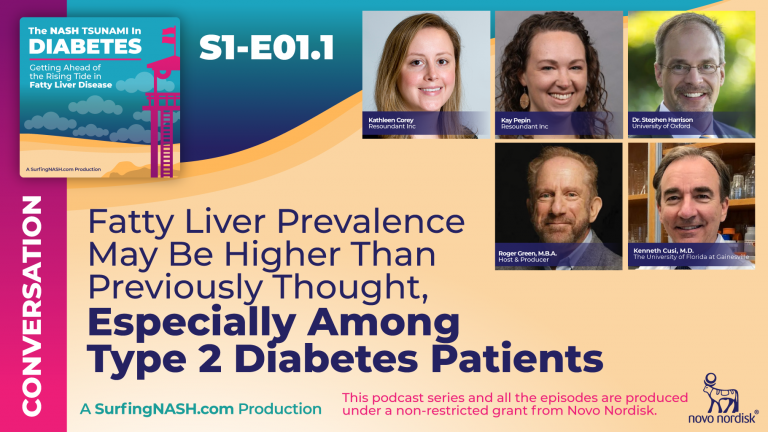