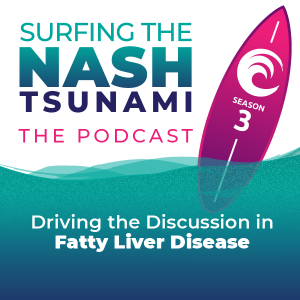 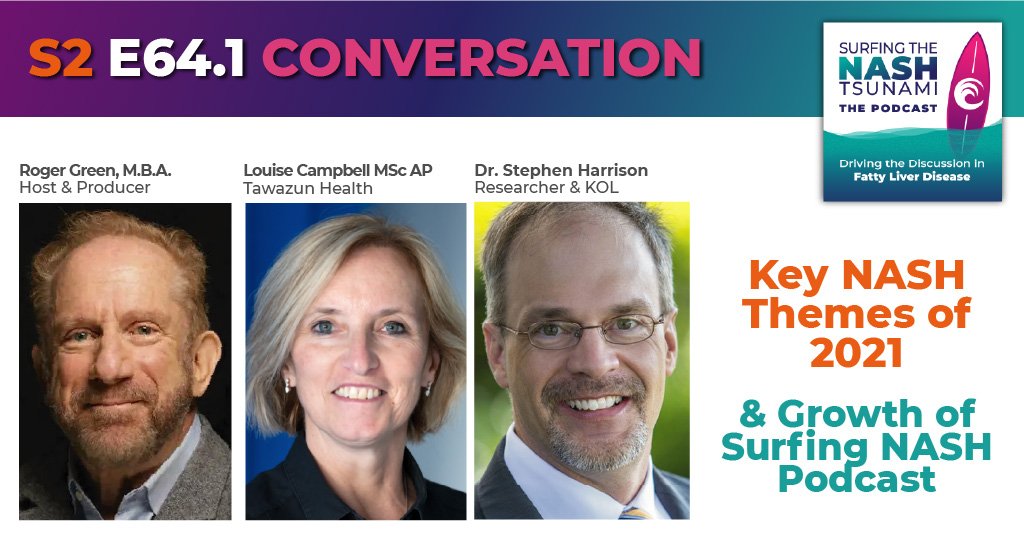 It seems fitting that the first SurfingNASH event of 2022 should include Stephen, Louise and Roger. In this thoughtful, fast-moving conversation, Stephen identifies what he considers five key areas where the Fatty Liver community has progressed in the past year:

2021 saw two separate, vitally important calls to action to share the scope of the upcoming NASH pandemic with the medical community at large and begin to create forums and processes to develop an agenda and care practices that would reach far beyond hepatolotgy all the way to primary care and other specialties that have historically had little to do with the liver. Jeff Lazarus work with colleagues at Wilton Park and in over 100 countries to evaluate the current status of NASH diagnosis, treatment and screening around the world and to being developing a public health agenda. At around the same time, a multidisciplinary panel of US opinion leaders organized by AGA published a general call to action and a specific Clinical Care Pathway, starting at diagnosis, that included multiple specialties and, for the first time, set out to define a way specialties can work together in identifying patients at risk, screening them for disease, and then treating as appropriate.

2021 saw the publication of two major papers on the natural history and progression of the disease. One paper produced by Stephen, Naim Alkhouri and a range of associates, evaluated a large group of seemingly healthy middle-aged men who receive treatment at the San Antonio Military Medical Center and mirrored a smaller study 10 years earlier. The two studies were fairly consistent in determining that slightly over one adult in three has demonstrable NAFLD and one in seven or eight has documentable NASH. The difference in the populations was that while approximately 2% of the 2011 sample exhibited F2 or F3 NASH, that number almost tripled ten years later. These papers and Dr. Arun Sanyal’s work published later in the year in the New England Journal of Medicine indicated that we can project a steadily increasing trend line for cirrhosis cases, with growth in most major markets at 10-12% per year.

News here was mixed, although Stephen points out that we have learned from each failed trial. SurfingNASH discusses this topic frequently, so suffice it to say that as the year ends, three medications recruiting or conducting Phase III trials and several other exciting, innovative agents have already demonstrated some positive Phase II results.

Stephen feels that the SPLENDOR study, which we discussed recently on the podcast (S2 E60), merits notice because of what it suggests about the ability of dramatic weight loss to halt or reverse cirrhosis. There are drugs in development right now that appear capable of producing the same levels of weight loss shown with bariatric surgery, which provides hope that we can eventually stabilize and perhaps regress fibrosis levels in cirrhotic patients.

Several different modes of non-invasive testing have made progress during the year, ranging from liquid tests that received FDA approval and/or enhanced their commercialization capabilities to published research suggesting that MR Elastography (MRE) has compiled much of the data necessary to prove outcomes with greater clarity and confidence than biopsy. Stephen shared his belief that 2022 will be the year when academics, drug developers and regulators begin to align around a strategy to move beyond biopsy with deliberate speed.

None of these items are new, but the way Stephen organizes them is clearly worth a long listen.

This website uses cookies to improve your experience while you navigate through the website. Out of these cookies, the cookies that are categorized as necessary are stored on your browser as they are essential for the working of basic functionalities of the website. We also use third-party cookies that help us analyze and understand how you use this website. These cookies will be stored in your browser only with your consent. You also have the option to opt-out of these cookies. But opting out of some of these cookies may have an effect on your browsing experience.
Necessary Always Enabled
Necessary cookies are absolutely essential for the website to function properly. This category only includes cookies that ensures basic functionalities and security features of the website. These cookies do not store any personal information.
Non-necessary
Any cookies that may not be particularly necessary for the website to function and is used specifically to collect user personal data via analytics, ads, other embedded contents are termed as non-necessary cookies. It is mandatory to procure user consent prior to running these cookies on your website.
SAVE & ACCEPT

Stay In Touch with Surfing NASH

S3-E4.2 – NASH-TAG 2022 Wrap-Up: The Fireside Chat and the Changing Paradigm For NASH Diagnostics

S3-E4 – NASH-TAG 2022 Wrap-up: What Did We Learn about Fatty Liver Disease and Clinical Trial Design?